English
“A good light should bring a comfortable feeling to life”

“A good light should bring a comfortable feeling to life”

AATECH have a “stubborn” attitude when designing or producing a LED light, everything we want to make it best, so from the raw materials choosing to production process, every step are very strictly at AATECH, “How to make a good light is easy and also difficult, easy step is to choose the guaranteed materials, produce it carefully, then it comes a good LED product, difficult step is how to make sure each materials performs good at different conditions, find a balance between each materials, only by this, the product is real good with stable lifetime” said by Mr. Zhu. 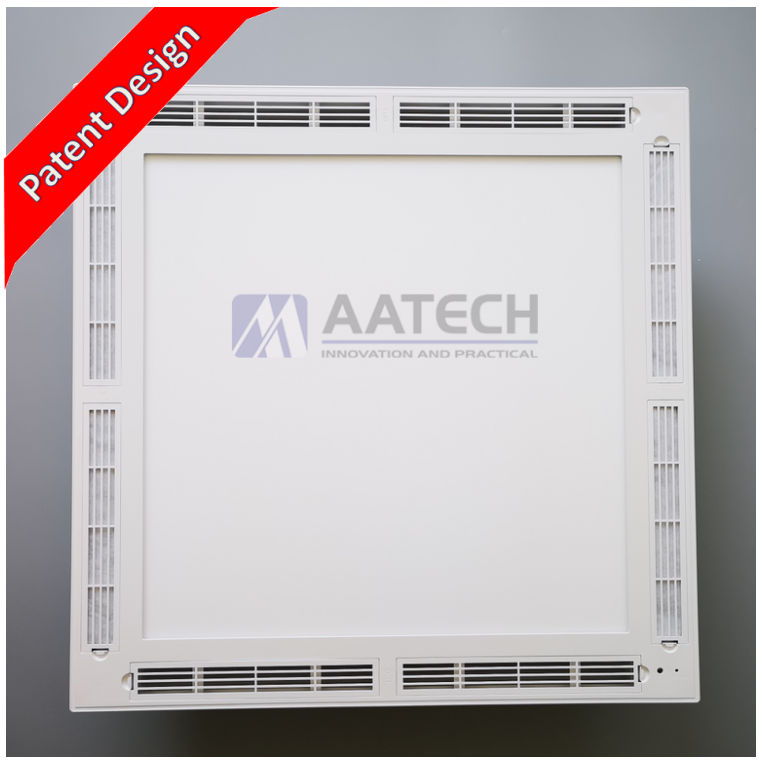 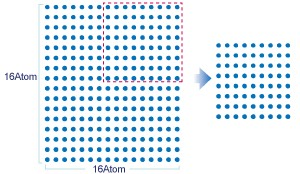 Air can eliminate 25% to 45% of nitrogen oxides in vehicle emissions, and can be used to control PM2.5 suspended particulates, excessive air pollution.

There are four main advantages of titanium dioxide:

2) Titanium dioxide will not dissolve itself in the photochemical reaction.

4) The raw material of titanium dioxide is rich in titanium ore, and the price is low.

The energy generated by light (below normal normal light) triggers the oxygen and water molecules nearby converted into highly active O-, O2-, O3- (superoxide ions) and hydroxyl radicals (OH-) to decompose organic substances (viruses, bacteria, odor, oil dirt, dust,harmful to humans or the environment), convert it into carbon dioxide (CO2) and water (H2O), this is the role of photocatalyst. 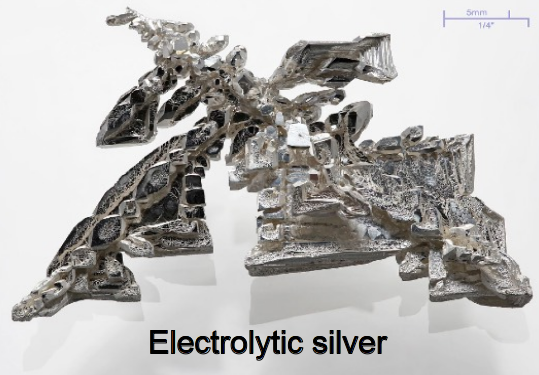 Silver is a soft and white shiny transition metal with the highest electrical conductivity, thermal conductivity and reflectivity among all metals.

Silver has high ductility, so it can be rolled into a transparent foil that is only 0.00003 cm thick, and 1 gram of silver particles can be drawn into filaments about two kilometers long.

The principle of action is that nano silver easily adsorbs oxygen atoms on the surface of nano silver particles, so it has strong oxidizing power for microorganisms, and can interact with the hydrogen-sulfur functional group (-SH functional group) on the surface protein of microorganisms, that is, its structure is destroyed by oxidation to achieve excellent antibacterial effect.

Nano silver has many advantages such as broad-spectrum bactericidal effect, no drug resistance, no toxicity, no irritation irritation, no need for light activation and no influence by acid and alkali values. 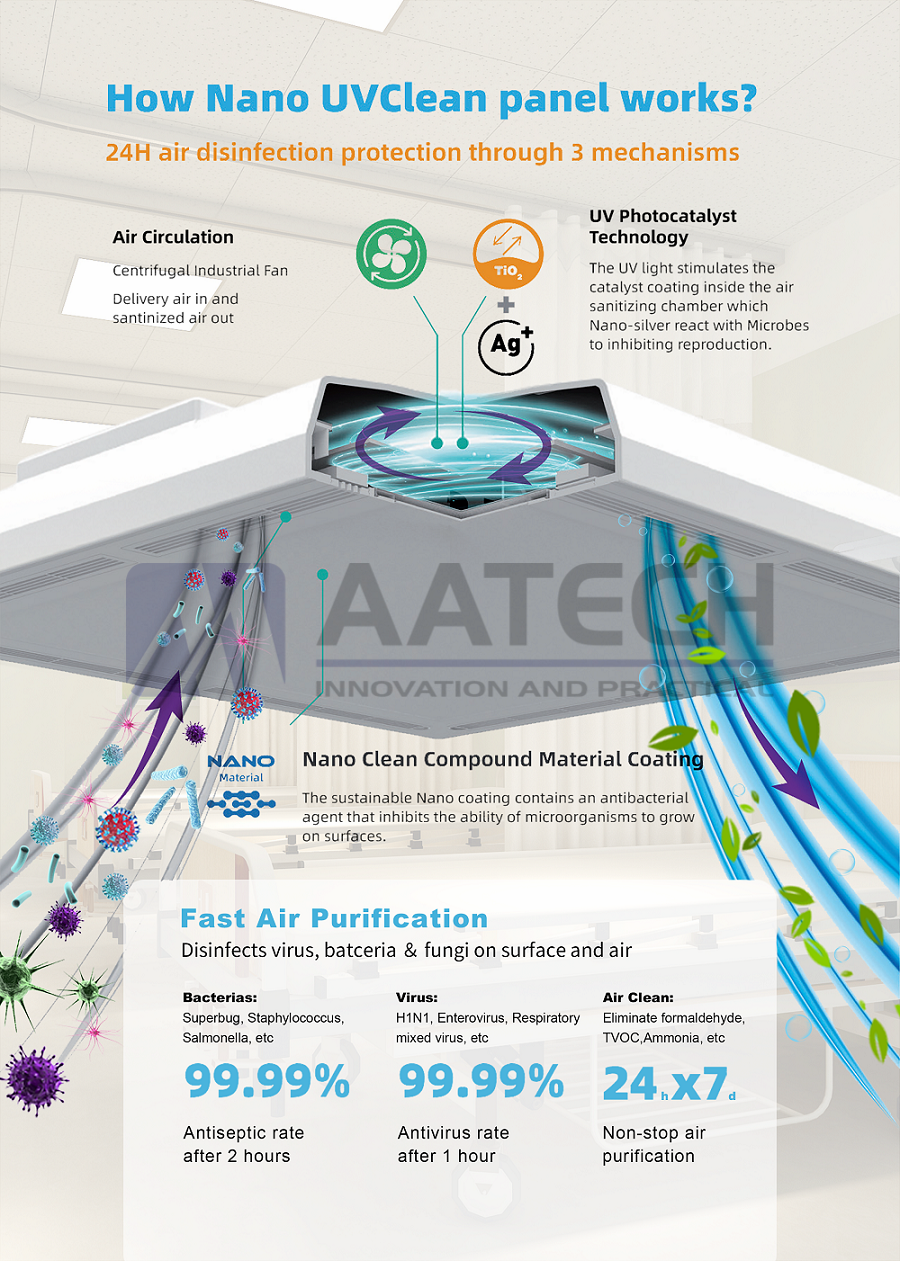 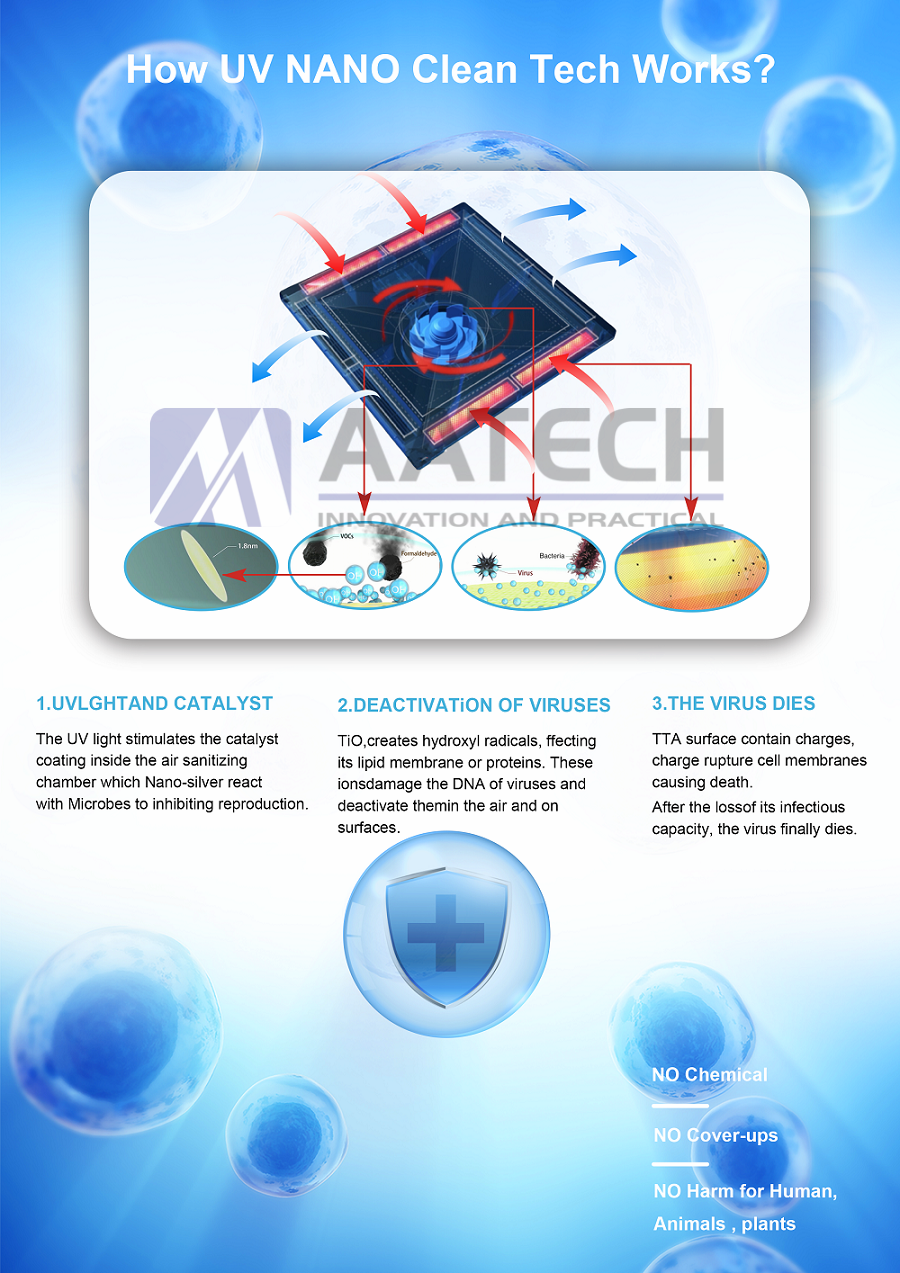 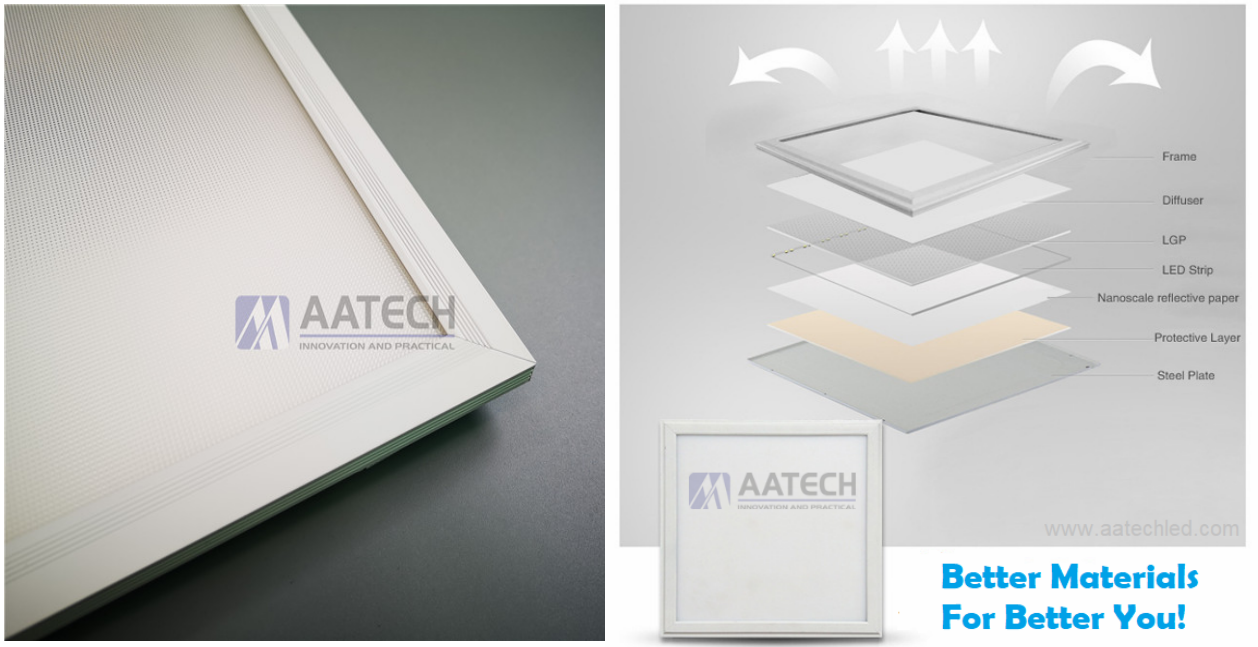 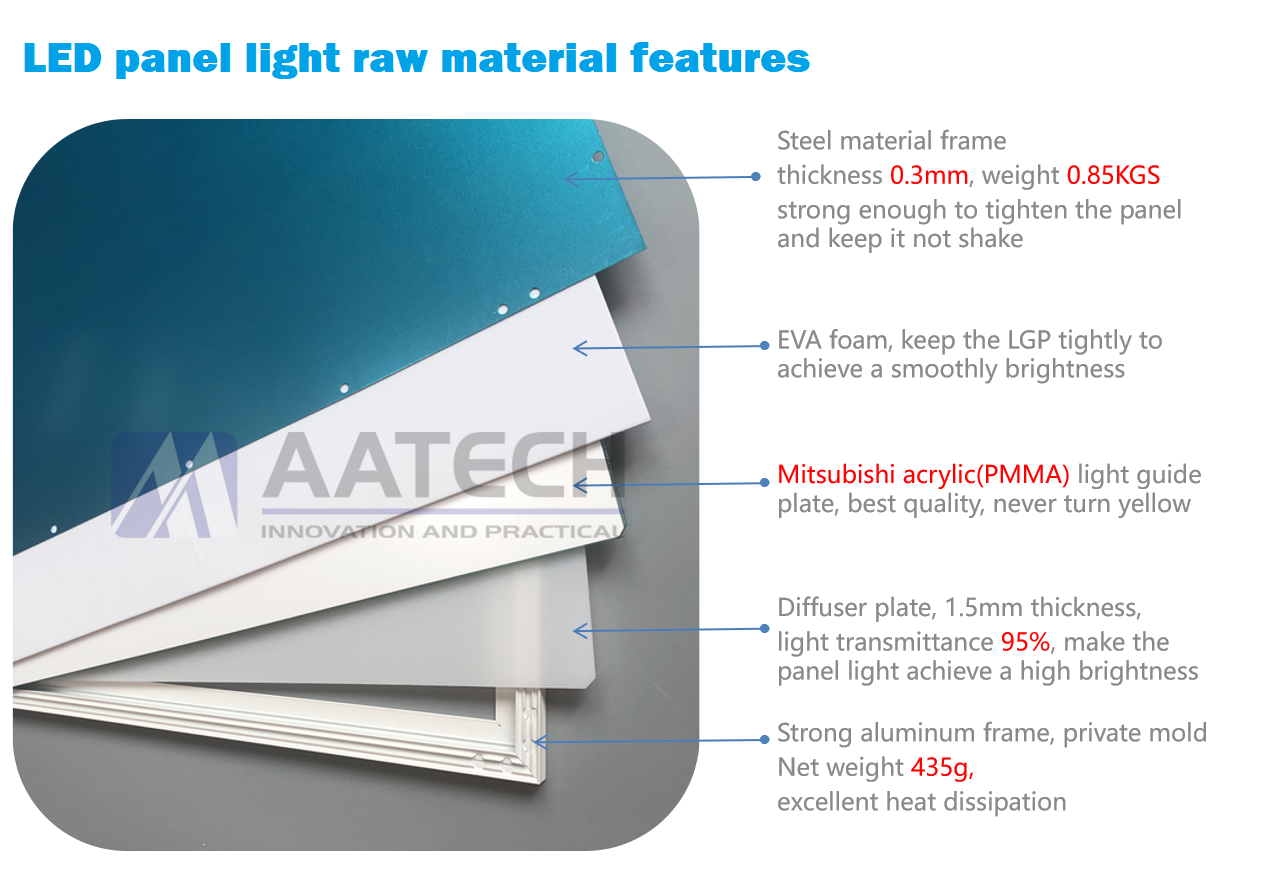 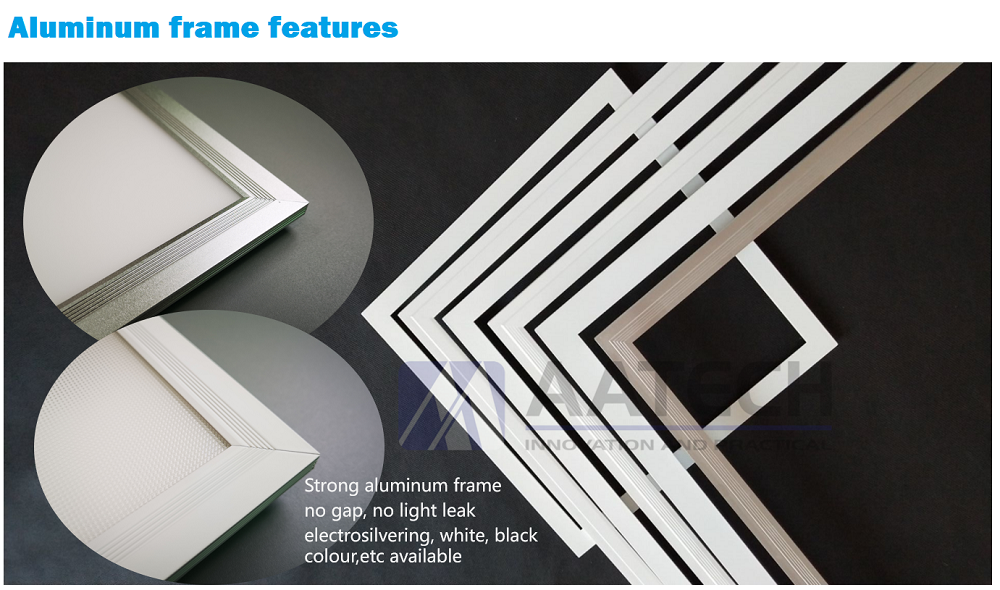 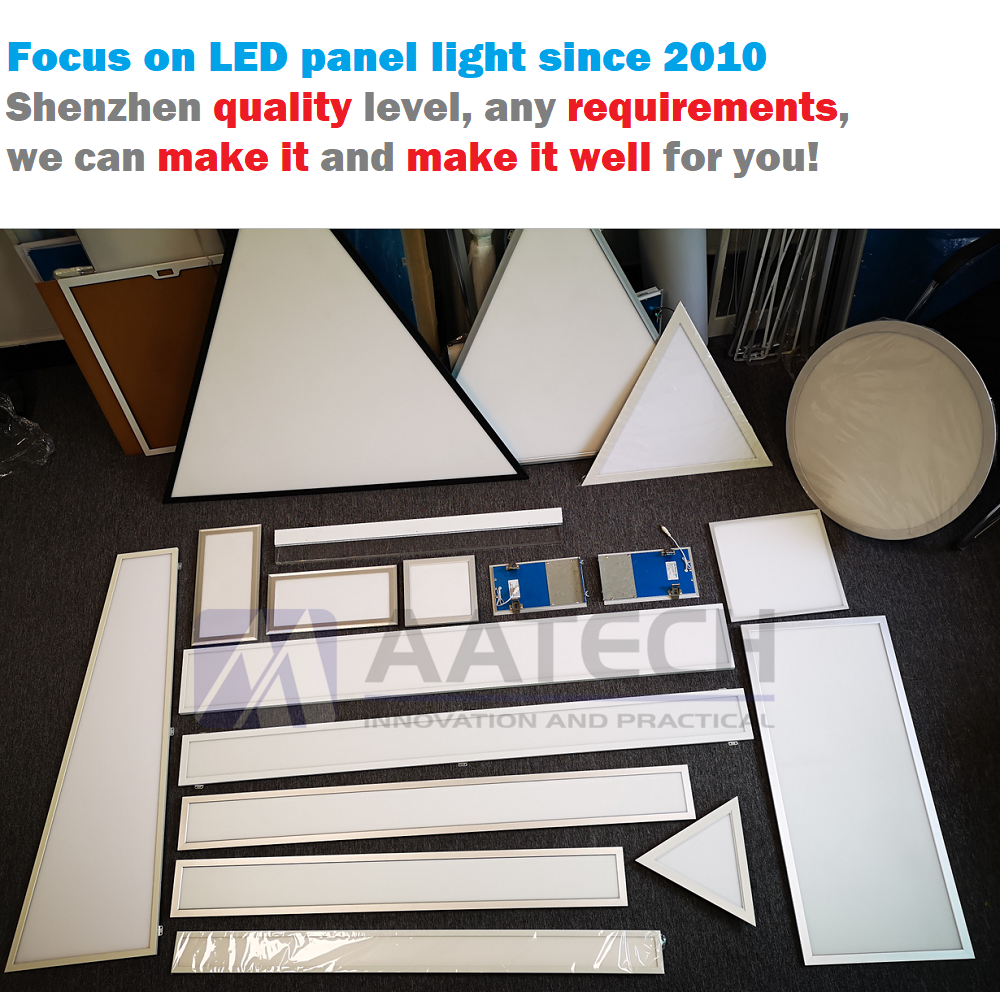 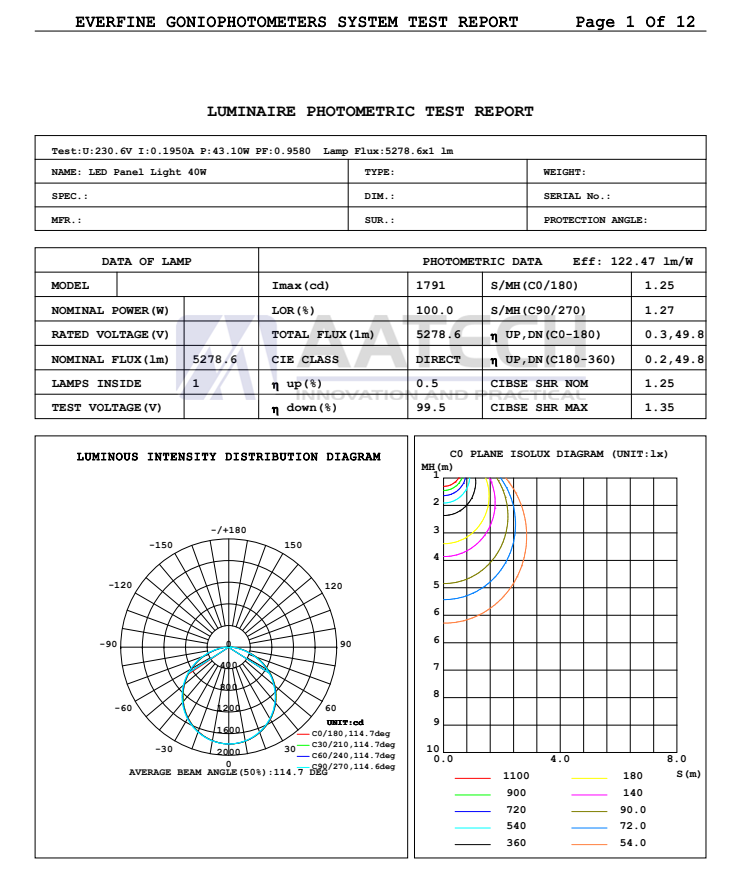 T series track light adopts the latest technology of cold forging. The lamp body is made of #1070 aluminium ingot by one time forming without secondary process like splicing, riveting and soldering. The cooling effect of radiator is completely same as that of raw aluminum material with good heat dissipation,   and there’s only 3 steps to make an aluminium ingot turn into a lamp:

1. Put an aluminium ingot into hydropress, getting a primary lamp housing.

2. Lathe the lamp housing, getting a delicate lamp body.

3. Assemble the lamp body with other parts.

The excellent heat conductivity determines lamp quality, combined with high performance light source, we can control our lamp's light decay <10% within 30000hrs, <20% within 50000hrs. By our test, the cooling effect of cold forging aluminium is 30% higher than that of same size of #6063 profile aluminium and double better than die casting aluminium. 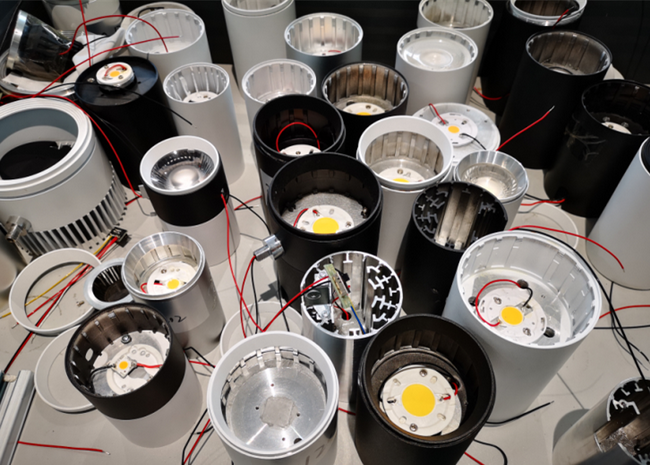 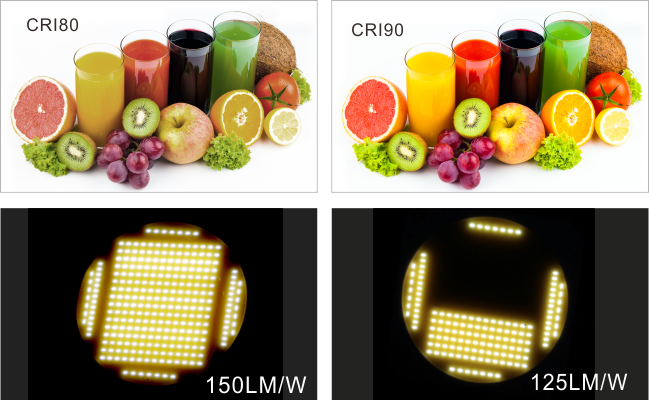 Free soldering design (including LED, driver, connector, etc), which is convenient for assembly and customer can change any parts easily and quickly.

The specialized LED+Reflector of lamps for food display can highlight the freshness of food with the most appropriate lighting color, so that the food color under our lighting is closer to or even better than the real color itself. For example, baked food looks more crispy with the golden brown light, and meat looks more bright red with the pink light. 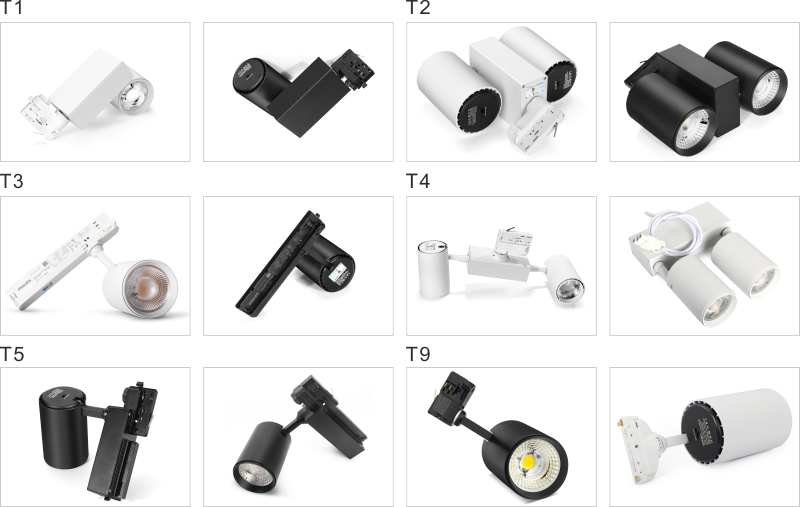 The basic requirement for high quality lighting design is no glare or minimal glare. Because glare will reduce our inspection ability, which is not obey visual comfort and the proper distribution of room lighting. The glare may be caused by physiology, like when the sun or any other light cause interference on visual operation, people's perception on the surrounding environment will be weakened. Or it may also be caused by psychology - When there are high illumination in outside area and cause distraction, people will have subjective sense of glare. About the relative glare, the viewer's gaze is continually attracted from the working vision to the brighter area. This glare will distract people's attention to what they observe - whatever it's computer screen, or showpiece in the shop, repeated changes between the different level of illumination will cause visual fatigue.

According to the formula provided in GB50034-2004 appendix A, UGR level

All ATCOB products are designed based on the feature of anti glare, and specially design super anti glare down light and track light for high-end hotel, apartment,etc.

ATCOB’s lowest UGR can be 9.

Free soldering design (including LED, driver, connector, etc), which is convenient for assembly and customer can change any parts easily and quickly. 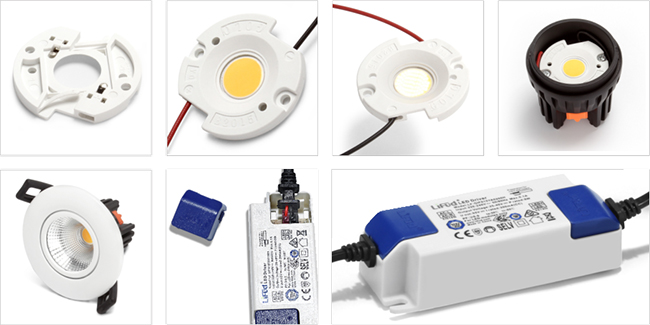 By use strong aluminum housing, achieve a good heat dissipation and guaranteed the whole light lifetime from the beginning.

ATCOB are open each order’s heat dissipation test report to every customer. 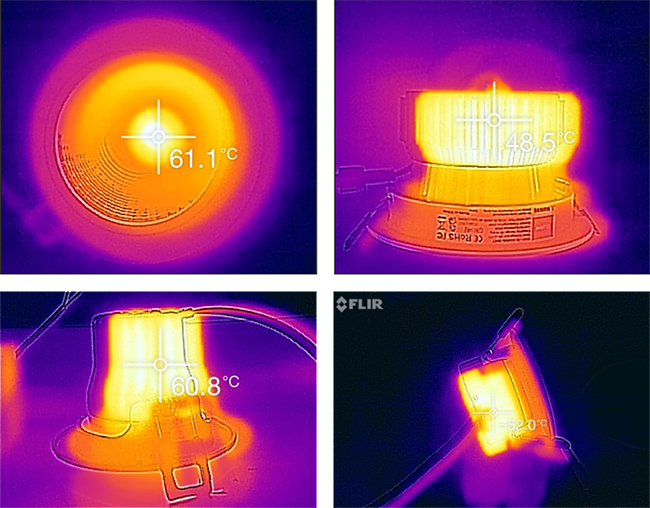 The specialized LED+Reflector of lamps for food display can highlight the freshness of food with the most appropriate lighting color, so that the food color under our lighting is closer to or even better than the real color itself. For example, baked food looks more crispy with the golden brown light, and meat looks more bright red with the pink light. 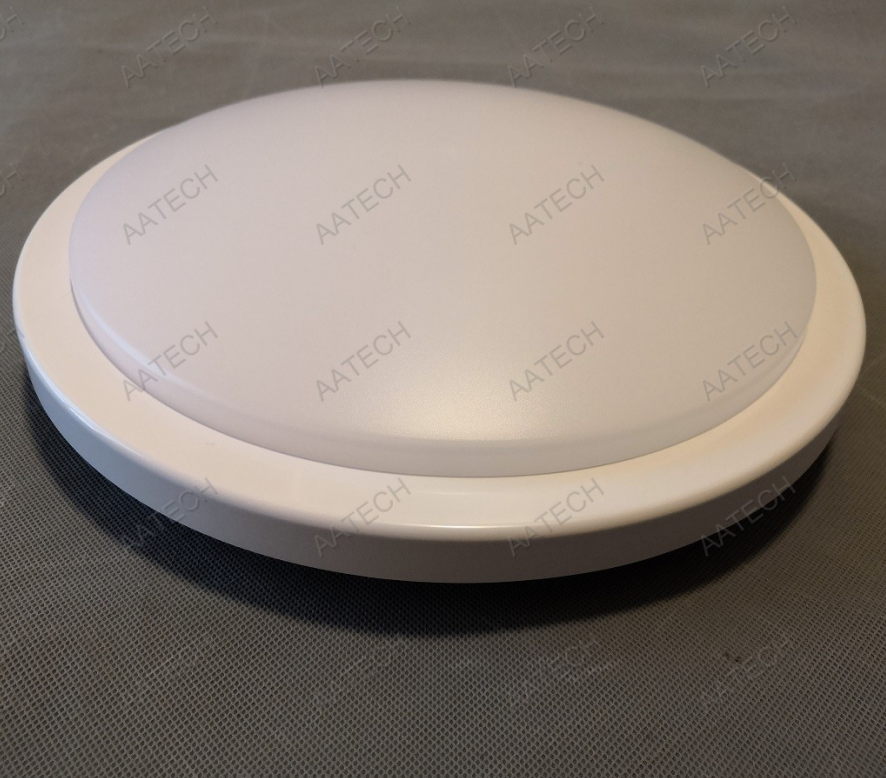 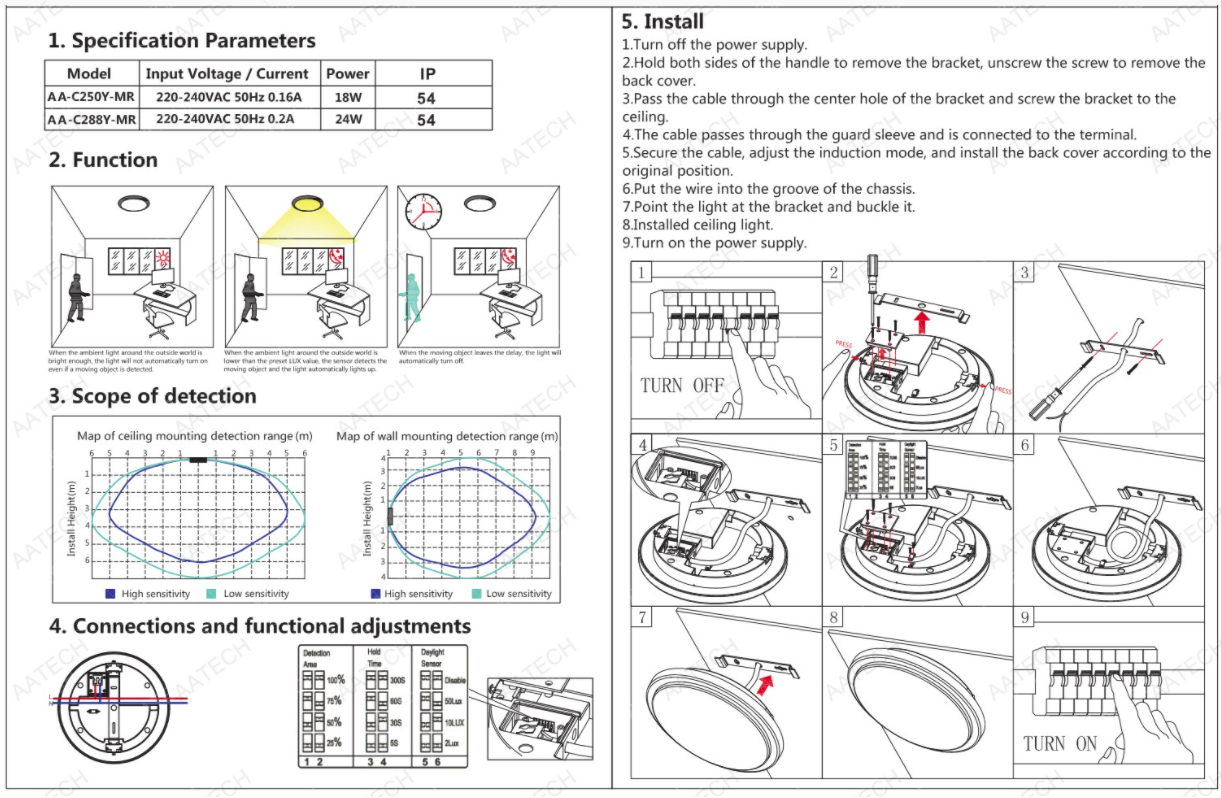 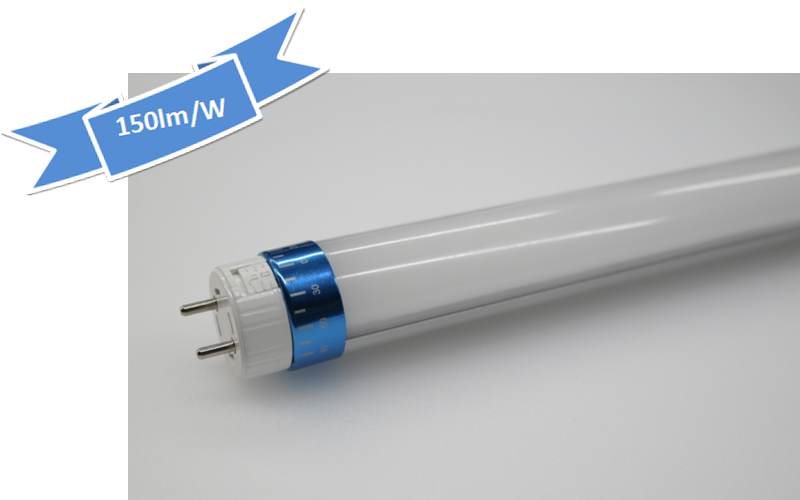 • With thicker aluminum housing, good heat dissipation from the beginning; 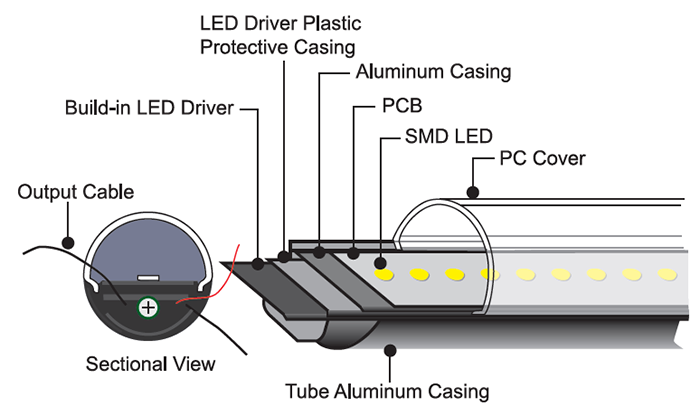 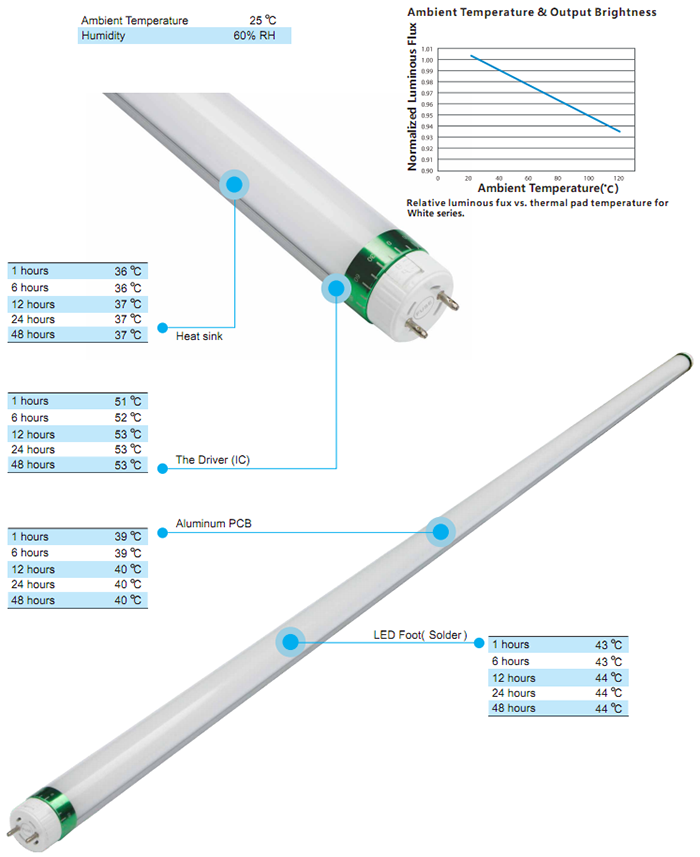 Compared with traditional fluorescent tube, LED tube is lighting in single side, if T8 base is fixed, the light angle will be deviated.

By rotated tub caps, can offer you a good performance brightness in every angle! 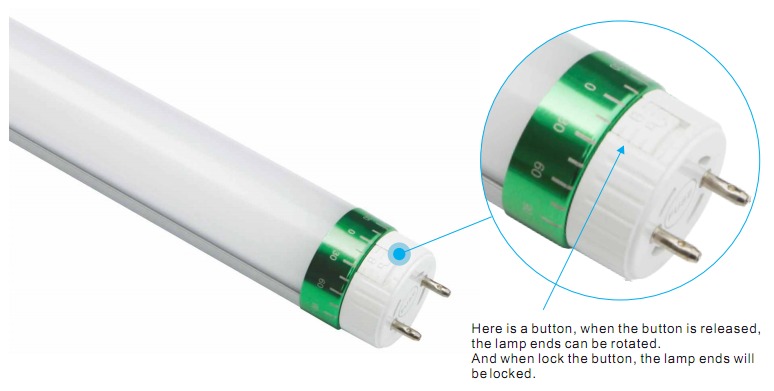 • Before install, check the product model, Magnetic ballast or Electronic ballast, according to follow instructions to install it.

• By magnetic ballast can keep it By electronic ballast must be remove first and then connect the wire.

Noted: when LED tubes are replaced from a standard fluorescent tube, the starter must be removed and replaced by enclosed fuse.

MUST be by-passed by a professional electrician

Noted: We strong recommend to remove ballast, because the ballast will consume power and reduce the PF value.